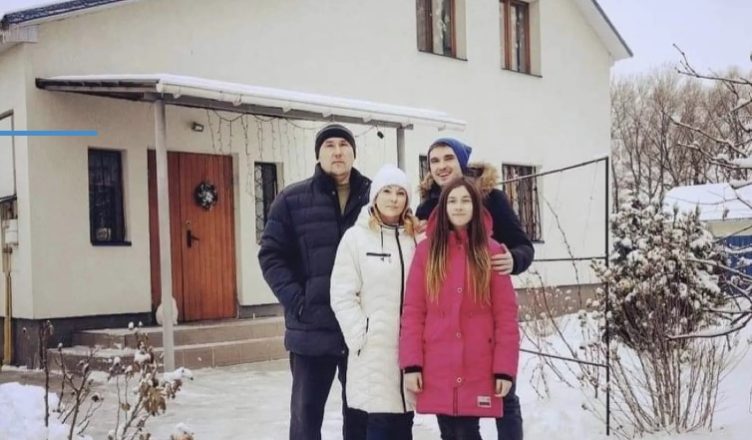 Vlad Cherniavskyi was at home with his family recovering from surgery when the Russians came. Here, he talks about what he and his family saw during the occupation and how they managed to escape.

The walk to freedom might have been a relief for someone else, but for Vlad Cherniavskyi, it was a terrible thing.

When he and his family tried to leave the war-torn town of Hostomel, Ukraine, for the first time in early March, they saw how big Russia’s invasion was.

Cherniavskyi says, “Some buildings were on fire, and there were a lot of dead bodies.” “Every other house was torn down.”

He saw some places where people had made signs and used other ways to ask for help: “On the fences, people had written, “Peaceful people here.” Please don’t fire. Some only had fence left. No house was there.”

Since the Russian attack started in late February, Cherniavskyi has seen a lot of sad and scary things. He has many stories like these.

Even though he and his family eventually got out of the city, which was under Russian control until recently, their trip and the last few days they spent in their home were violent.

The United Nations says that in the first month of the conflict, more than 3,000 civilians have been killed or hurt, and millions have been forced to leave their homes.

For Cherniavskyi, the number of people who died is more than just a number. When he talked, he told shocking stories about how his family hid in their cold basement after Russian soldiers told them to leave, how a neighbor was shot by Russian soldiers just feet from their front door, and how they said their goodbyes as rockets blew out their windows.

Cherniavskyi’s life before the war was pretty normal for a 26-year-old living in coastal Odesa. He put on workshops for Ukrainian actors and teachers from the U.S., the U.K., and other places.

Early in February, he went to Hostomel, which is outside of Kyiv, the capital of Ukraine. He stayed there after a planned kidney surgery. He spent the days and weeks getting better at his family’s house, where his 17-year-old sister Violetta, his mom Victoria, and his stepdad Serhiy all live.

Cherniavskyi said there was “uncertainty” in the air the night before the invasion, but there were no sure signs of a coming war. Then, around 6 a.m. on February 24, a nearby explosion woke him up.

“I looked at what my American friends were writing on Instagram, and they said, ‘It started,'” he says.

He says that within hours, his family could see Russian helicopters flying low above. Then there were more explosions, mostly at the nearby airport, which Cherniavskyi could see from his home and where fighting had been going on since the beginning of the invasion.

He watched some of it happen.

“My mom and sister hid in the basement, while me and my stepdad stood near the garage. We had been watching for maybe 30 seconds when a fighter jet started shooting at the airport “he says. “Both the helicopters and the jets were going for the airport.”

Cherniavskyi says that his family had no electricity, heat, or water by the second or third day after the invasion. Residents were able to eat fresh meals because a warehouse in their neighborhood gave them food.

But the house, which was heated by electricity, kept getting cooler.

“Some days, it was about 14 degrees Fahrenheit, or -10 degrees Celsius. It’s a little tricky, but it did help us keep the food fresher for longer “Cherniavskyi says this, but he adds that the temperatures made it hard for him to sleep or feel comfortable after his kidney surgery.

His family did have a fuel generator in their garage. They used it to cook food and charge their phones, and they also let their neighbors use it to charge their own phones and power banks.

Soon, however, they were stopped.

Cherniavskyi says that on day five, his uncle told him that Russian troops were going door to door in the town and taking people’s cell phones.

“It happened very quickly, and we weren’t ready for it,” he says. In preparation for their own visit, the family found four old phones that they could give to the soldiers if they asked, and they put their new phones in different places around the house.

“Almost as soon as we did it, someone knocked on the door,” Cherniavskyi says.

His mother and stepfather looked out the window and saw a group of Russian soldiers who said, “You have three seconds to get out or we will start shooting.”

“”How many people are here?” they asked. ” Cherniavskyi says that, “they told them there were four of us. So, my sister and I also came out.”

Cherniavskyi thinks that around the yard and garage, eight or nine soldiers were standing in different places. “They had their guns aimed at us. It was a lot of fun. They showed us by pointing to a neighbor’s house that it had been burned down by fire.”

Two of the soldiers came inside and threw the family’s things around. Cherniavskyi thinks they were looking for Ukrainian fighters. They found the family’s four old phones and broke them, which is a common way for the Russians to stop people from getting information.

Then they told the family to get their things and leave. Immediately.

As scary as that sounds, Cherniavskyi and his family were frozen with fear at the time.

“It is hard to say why. When it really happened, it was different from what all the movies show. No one was upset. We just didn’t know what was going to happen next,” he says. “If you do anything stupid, you’ll die.”

But when he talks about it weeks later, he gets emotional. He tells PEOPLE that it was especially hard to see his sister trying so hard to find the family cat, Cleopatri, as they gathered their things.

He says, “My sister started to cry.” “She really loves that cat. And I looked at her, and it hurt so much to see her. “I don’t want to leave without him,” she said, but we had to.”

Cherniavskyi was packing a few things to bring with him when he found an old pair of white pants that he had worn in a school play.

On his way out the door, he quickly tied the pants to the family’s fence as a “makeshift white flag” so that they wouldn’t shoot at them.

He and his family left on foot, but when they got there, they were met by a different group of Russian soldiers who told them to go back home and stay in their basement for a few days. After that, “it was all over,” he says.

Cherniavskyi says, “They led us back and shut the door.”

His family spent the whole day in the basement, just in case the Russians were still in the house. “We didn’t know if they had left or were going to come back.

My sister was beginning to sneeze because it was so cold. I was also very cold because of my kidney. In those conditions, it was hard to get better.”

One day after the Russian soldiers came to their house, Cherniavskyi and his family heard a friendly knock on the door. One of the neighbors came over to get his phone back after using their generator.

“My stepdad gave him his phone and power bank, led him to the front gate of our yard, and shut the door. Then he came into our house through the front door and shut it “Cherniavskyi says.

“We heard a shot as soon as he came into the room where we were hiding. As soon as the gun went off, we heard a scream.”

Then he fired again. Then there was complete silence.

Cherniavskyi says that the neighbor was killed as they were leaving their house with the phone bank still in their hands.

“He was shot for no reason. He was going from our house to his house, so he had to cross the road.”

Eventually, the neighbor’s brother was able to take the body back to his house, where they dug a temporary grave in the yard.