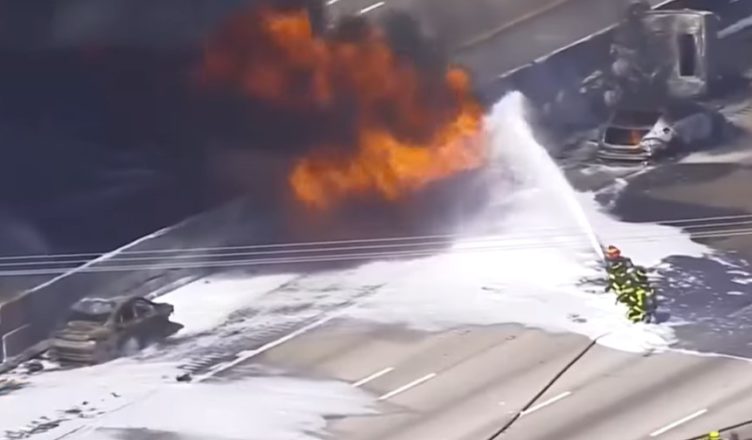 After a fiery car accident last week, a woman in Florida is glad and thankful that both she and her boyfriend are still alive.

ABC affiliate WPLG and NBC affiliate WPTV-TV say that Su Hninyi and Broward County firefighter Bryan Aparicio are getting better after getting out of a burning car on Interstate 95 last Tuesday.

The couple was in an Uber when, according to reports, it crashed into a fuel tanker truck in Delray Beach and caught fire.

People said that Aparicio was able to escape by breaking a window in the back seat of the car. He found out later that Hninyi wasn’t with him, so he quickly went back to get her, even though he badly burned himself in the process.

Hninyi says that Aparicio saved her life. She told WPLG, “Now that we almost lost each other, we love each other even more.”

“Without him, I wouldn’t be here today,” Hninyi said. “He saved my life.”

Jason Smith, president of the Broward County Professional Firefighters and Paramedics Association, International Association of Firefighters Local 4321, told in the past that Hninyi and Aparicio were going north to go on a cruise when the crash happened.

Before she was saved, Hninyi told WPTV-TV that she and her boyfriend were afraid they wouldn’t make it. “I was just thinking, ‘Oh my God, I’m not going to make it.’ ”

Once they were both out of the car, Hninyi told WPTV-TV, “We ran away from the car, and it blew up behind us.”

The accident happened at 1:15 p.m. and involved five people, according to Delray Beach Fire Rescue, which posted a video of its response on Facebook.

A previous report from the Miami Herald said that Hninyi and Aparicio were taken to the hospital with severe burns and were in critical condition.

WPLG says that Aparicio is now getting better at home after getting second- and third-degree burns on his face, hands, arms, and legs. Hninyi’s legs and arms are also burned.

Reports say that 35% of the 61-year-old Uber driver Carlos Molina’s body was burned.

Still, Hninyi is just happy that everyone is okay after the accident.

She told WPTV-TV, “I’m glad to be alive.” “I’m glad Brian is still alive. I’m just glad everyone is here. This is what’s important.”