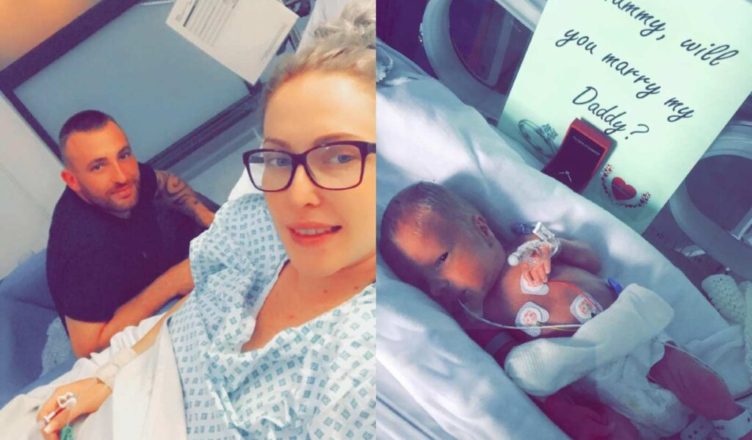 This is the touching moment when a premature baby, who was just a few weeks old at the time, helped his father pop the question to his mother in the hospital.

It was a difficult moment for Cobie Sellors’s parents, Sian Stafford and John Sellors, because their son was born ten weeks prematurely and weighed only 3 pounds 9 ounces when he arrived.

Because of the COVID-19 restrictions, John was unable to present him to his family and friends, so the romantic John enlisted the assistance of his two-day-old son as well as the nurses to assist him in surprising Sian.

The question of whether or not “Mummy would marry Daddy” was posed in a note that was left in Cobie’s incubator on August 3 along with the engagement ring.

Sian was so overjoyed to learn that her son had been able to quit using his breathing machine that she initially failed to see the note; nevertheless, she ultimately conceded that she would say yes.

John, who is from Pinxton in Derbyshire, England, said, “I’m not normally the romantic type, but I really wanted to do something to lift Sian’s spirits, and she had been dropping hints about wanting to get married for a while.” John proposed to Sian when she was hinting that she wanted to get married.

“The nurses were fantastic and really helped make it a special proposal to remember,” explained the new father, who was 29 years old at the time of the event.

They simply instructed me to take Sian out for a cup of coffee and assured me that everything would be taken care of when we returned.

“I was so astonished, I really didn’t anticipate that, and I was really overwhelmed,” said the woman who was 26 years old at the time.

“I was concentrating so intently on Cobie that I initially missed both the note and the phone call!

After that, though, John remarked, “see, I think Cobie wants to know something!” When I finally got around to reading the note, it was a moment that was both surreal and joyous.

They have been together for the past eight years and have been blessed with a daughter named Ruby who is now four years old. As soon as they know that Cobie is secure at home, they will begin making preparations for the wedding.

Lynsey Lord, who works at King’s Mill Hospital in Mansfield as a deputy sister on the newborn ward, was one of the people who assisted with the arranging of the surprise proposal.

She stated, “It’s not often that we get the chance to be involved in a proposal on the unit, and this was certainly a first for me, but it was so beautiful to see the family all so happy, especially during what has been such a challenging period for everyone.” The proposal took place on the unit.