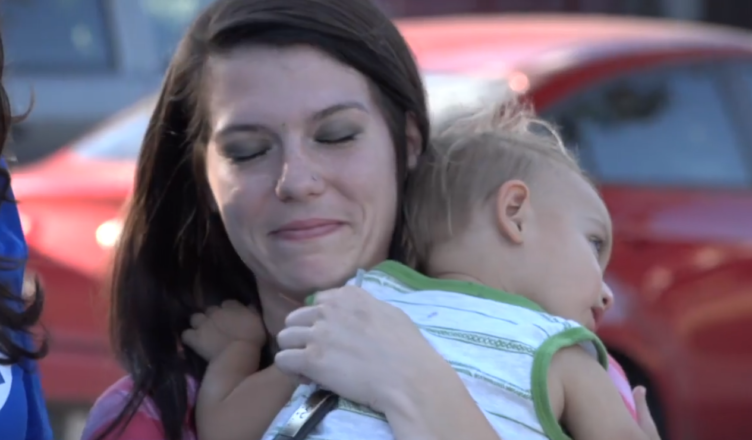 For Rebecca Polston, who is a single mother, every day is an exercise in fortitude and determination.

Rebecca’s son, Rhylon, is two years old and has been battling renal illness since he was a month old. He has been on dialysis ever since, and he undergoes the treatment for 10 hours every night.

She can’t get a job until he gets the kidney transplant he needs, but she still uses her car a lot because of how often crises arise.

This summer, tragedy struck when Rebecca’s automobile was struck and destroyed by an unknown driver.

There was no way for Rebecca to afford new wheels with only liability insurance and no income. Prior to a radio station hearing her story, the future of this modest family was up in the air.

Without knowing what KLTY 94.9 had planned, Rebecca and Rhylon were treated to dinner at a restaurant in Roanoke, Texas.

After finishing their dinner, they were led out to the parking lot to meet Bonnie Curry and the #SpeakLove team, a group of station employees committed to doing good in the community.

They were given $1,000 cash and several brand new toys for their son Rhylon, but the generosity didn’t end there.

George Grubbs, owner of a nearby INFINITI dealership, appeared out of nowhere and presented me with the keys and a brand-new silver car, wrapped in a red bow, and fully paid for.

Rebecca has taken care of Rhylon’s needs, which have included at least one trip to the hospital, since then.

The staff at 94.9 KLTY produced a video and shared it on Facebook, prompting an outpouring of love and support for the Polston family.